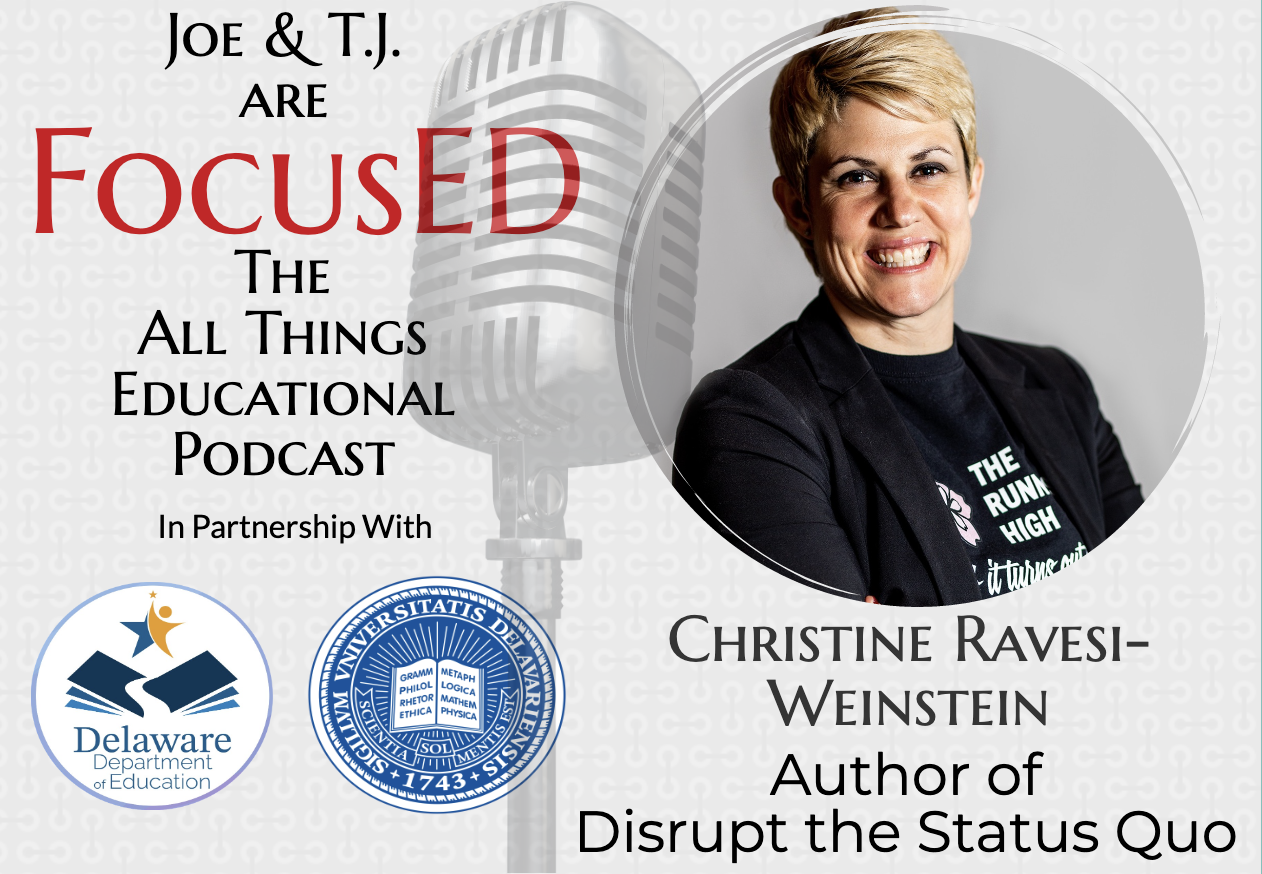 This is Season 4, Episode 6 of FocusED, featuring our guest, Christine Ravesi-Weinstein. It was originally recorded live for a studio audience in Delaware, and provided as a professional development experience in collaboration with the Delaware Department of Education, the Delaware Academy for School Leadership, and The School House 302. Don’t miss what Christine says about school leadership and how we must Disrupt the Status Quo in our schools…and so much more.

Christine Ravesi-Weinstein serves as a high school Assistant Principal in Massachusetts and previously worked as a high school science department chair for four years as well as a classroom teacher for 15. Diagnosed with anxiety and depression at 23, Christine began her journey toward mental wellness. She began a non-profit organization in June of 2017 aimed at removing the stigma of mental illness and promoting physical activity as a means to cope with anxiety.

As an avid writer and educator, Christine became passionate about bridging the two with her advocacy for mental health. Since March 2019, she has had numerous nationally published articles, including the number one most-read article of 2019 on eSchool News (she also had the number six and eight most-read articles in that year). She has also published articles with District Administration, the Teach Better Team, Tech & Learning, and SmartBrief.

Not only is she a highly sought-after speaker, but Christine is also a MASCD Board Member, and author of the books Anxious (by Times 10 Publications), Fighting Your Inner Voice, and Disrupt the Status Quo (both by Code Breaker, Inc.).

Christine and her co-authors focused on the four areas of the book because everything fell into those four categories, including culture.

Joe asked Christine to dive deeper into the conversation about positive toxicity.

Don’t miss what she says about perspective building.

Christine talks to us about listening strategies and hearing what others have to say.

The seed of toxicity is the parking lot conversation that’s not productive for anyone.

It’s the million decisions that we have to make in a day that prevent us from listening. ~ Christine Ravesi-Weinstein

Sometimes the reason for our lack of failure is that we forget what the goal is.

Don’t miss what Christine says about the power of face-to-face conversations.

Christine wants to eliminate numerical grading to improve the student experience. She believes that this can change the SEL landscape for kids.

You have to hear what she says about Jim Hensen.

Christine shared that she reads a lot of books about running.

She mentions Edutopia and Code Breaker as places to go for leading and learning.