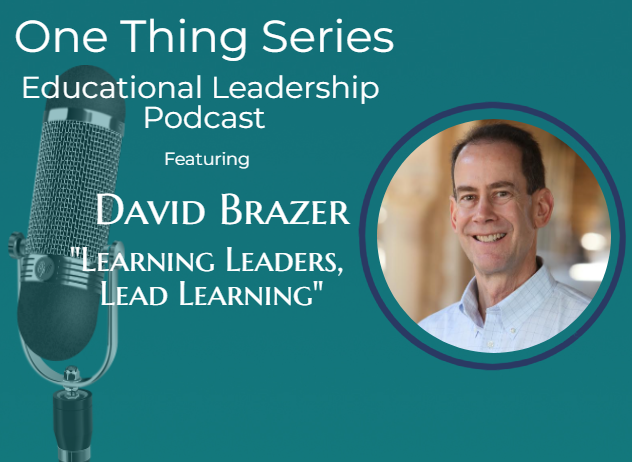 What You’ll Find in this Podcast Episode with David Brazer

Open-minded, engaging, inquiring…don’t miss what David says about asking questions and becoming a “learning leader” who is willing to listen to the answers.

David’s discussion of how educators respond to poor performance in Algebra I is insightful. It says so much about our common problems in education and will resonate.

David says that we need to engage in WHY questions, not about purpose, but to uncover the root causes for the problems we have.

What David says about stress and reverting to old routines is powerful. When we ask people to change, we have to know that it will cause stress. It means that we need to ensure that they feel safe so that they don’t go back to old practices.

Every leader wants to motivate their staff, David references Frederick Herzberg and Hygiene Factors when discussing what de-motivates people. You’ll want to hear what he says about what leaders should attend to!

Don’t miss what David says about “dreaming” big to make plans about what school could be if we’re focused and that we’re poised to take risks.

We love what David says about the elements of a learning experience.

David discusses the need for people to try out new practices in simulated settings before having to do it in reality when they’re under pressure.

David didn’t hesitate to mention Larry Cuban as a place where he gets knowledge and inspiration.

Referencing Dewey, what David says about social construction for knowledge and the simple truth about “talking to people” is awesome.

David wants to get better at asking questions before responding with passion. Don’t miss what he says about learning about teachers’ theory of action.

David is a reader. Don’t miss why David chooses to read more books than articles.

David attributes Scott Bauer to turning his academic life around.

David used to think that there are leadership rules-of-thumb that work in schools, but he learned long ago that rules-of-thumb for school leadership are mythical. Listen to his analogy about school discipline.

Books Mentioned During the Podcast with David Brazer

The Black Man in America by Larry Cuban

As always, let us know what you think of this with a like, a follow, or a comment. Find us on Twitter, YouTube, iTunes, Facebook, & SoundCloud. And, again, if you want one simple model for leading better and growing faster per month, follow this blog by entering your email at the top right of the screen. We hope you’ll tell a friend or book us to join your team for professional learning.