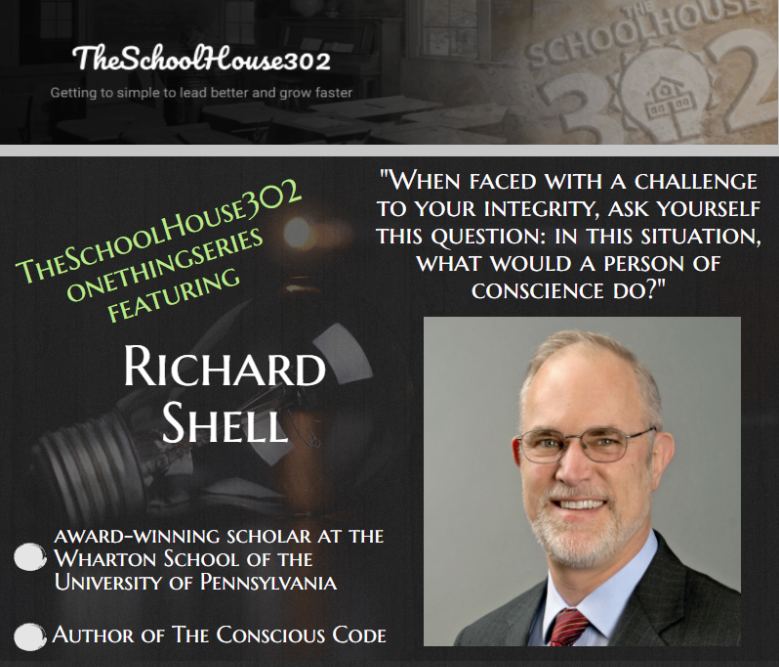 Richard is an award-winning scholar, teacher, and author at the Wharton School of the University of Pennsylvania. In his work, he helps students and executives reach peak levels of personal and professional effectiveness through skilled negotiation, persuasion, influence, and the discovery of meaningful life goals. Three beliefs permeate everything that he teaches and writes. First, success begins with self-awareness. Second, success progresses through excellence in practice. Third, as he shows in his latest book, The Conscience Code, success demands a lifelong commitment to the highest standards of integrity.

Show Notes from Our Interview with Richard Shell

Richard teaches a course in “ethics and responsibility” where students share stories about navigating value-challenges, in other words, the times that we are compelled to do things in life that don’t align with our sense of integrity. Throughout this interview, Richard calls on individuals to have courage and face those tough issues that surface from time-to-time.

As the interview begins, we dive right into a powerful story that is featured in the book. Sarah, who works at a firm, is being asked to do something which she knows is not acceptable. In short, Sarah decides to walk away from her job. Richard confronts this decision with the reality that many of us simply cannot do that due to a host of various responsibilities. Here at TheSchoolHouse302 we have joked on several occasions about the fact that our growing list of adult responsibilities can limit our courage. Throughout this interview, and in his book, The Conscience Code, Richard describes how we all need to learn how to stand-and-fight versus the alternative, cut-and-run.

Richard eloquently describes People of Conscience as those individuals who bring their sense of right and wrong to work and then listen to their internal voice as they work to lead in the directions of their values.

He beautifully describes the CRAFT of ethics in the book. Richard also refers to it in the show and how it is used–you need this tool!

Richard notes that humans are social creatures and that even when we feel alone we have allies. In moments of isolation, we need to seek a partner, mentor, teacher, or colleague who believes what we believe–the power of two.

You’ll love the practical nature of the OODA Loop developed by Air Force Colonel John Boyd. It is a great strategy to use for decision-making. In essence, value-conflicts are multi-stage events; they require a loop, always returning to observation.

We love the graphic, taken from https://expertprogrammanagement.com/.

Richard follows Robert Caildini (Joe is also a big fan). Check out Influence, Pre-Suasion, and Richard’s book, which Caildini said he would put in his top three if he had to only take three books with him in life, Bargaining for Advantage.

Richard wastes no time when we ask about the onething that people should do on a regular basis–Meditate! Check out our incredible interview with Valerie Brown and Kirsten Olson if you want to explore a powerful approach to self-awareness and mindfulness.

We were intrigued to learn that Richard is interested in learning more about how people change their beliefs.

As professional learners, we are always interested to hear what supports an individual’s growth and Richard uses Covey’s advice: Seek first to understand and then to be understood. The power in this strategy is that all we have to do is be aware. The good news is that we already have the ability to do this each and every day.

Lastly, Richard leaves all of us with a challenge–engage and see what happens.