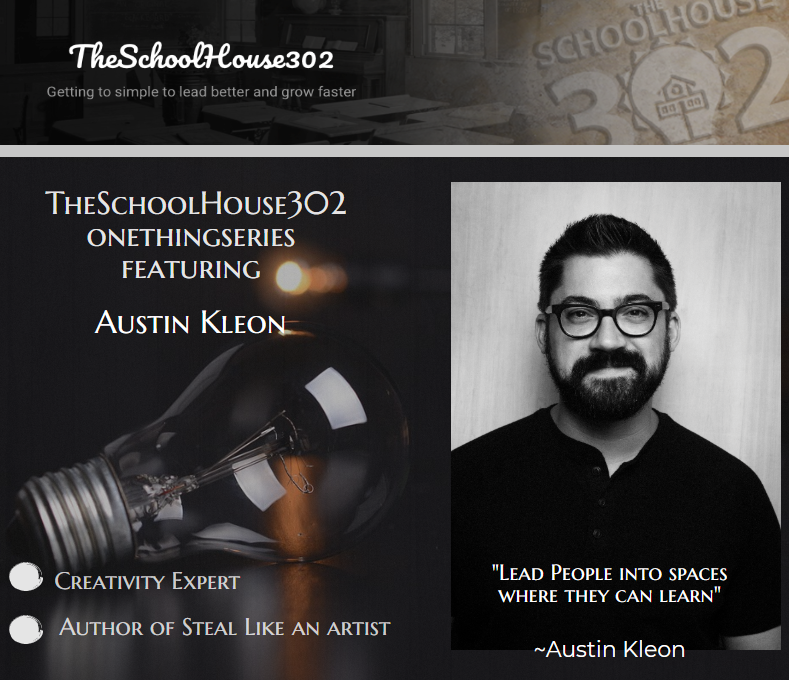 Austin Kleon is the New York Times bestselling author of Steal Like an Artist, Show Your Work!, and Keep Going. His work has been translated into over twenty languages and featured on NPR’s Morning Edition, PBS NewsHour, and in the New York Times and the Wall Street Journal. New York magazine called his work “brilliant,” the Atlantic called him “positively one of the most interesting people on the Internet,” and the New Yorker said his poems “resurrect the newspaper when everybody else is declaring it dead.”

He speaks about creativity in the digital age for organizations such as Pixar, Google, SXSW, TEDx, and the Economist. In his previous lives, he worked as a librarian, a web designer, and an advertising copywriter. He grew up in the cornfields of Ohio, spent a dozen summers in Austin, Texas, and now he’s taking a sabbatical on Lake Erie with his wife and sons.

His interview with TheSchoolHouse302 was fun, engaging and packed with great advice about being creative and much much more. Check it out.

Austin’s interview is a powerful example of some of the simplicities in life that are truly remarkable. His experience and wisdom provide insight for leaders to encourage creativity and to see through their own chaos. Be sure to listen and share so that we can all learn to trust our own growth and let go of some of the control.