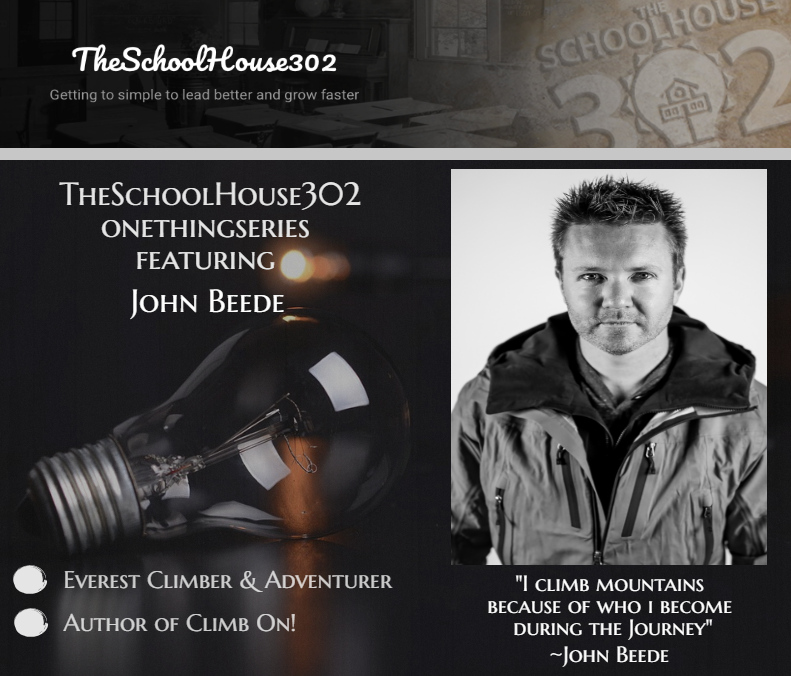 Don’t miss this leadership interview with John Beede, @johnbeede. Adventurer, John Beede has been struck by lighting, attacked by a 5-foot iguana, and he once did the hokey-pokey in the eye of a hurricane. He knowingly went swimming with Hammerhead, Great White, and Whale sharks. He was once even trapped in the Indonesian jungle between warring tribes and the world’s largest goldmine. His travels have taken him to 56 countries and every continent, including Antarctica.

John is an expert on peak performance, resilience, and leadership, many of the lessons he learned while pursuing his life’s biggest dream: reaching the summit of Mount Everest.

After two months of climbing, 9 months of full-time preparation, and 17 years of mountaineering, he planted his trusty ice axe into the summit of Mount Everest. Subsequently, he was featured on TV’s 60 Minutes and media outlets across the globe.

He is not sponsored. All funding for his expeditions comes from building and selling his own companies. Additionally, he has authored two books, including Climb On! Success Strategies for Teens and The Mini-Manual for Becoming Super Awesome. Together, they have sold over 50,000 copies.

His interview with TheSchoolHouse302 was simply awesome, check it out.

John’s interview is filled with wisdom for leaders and really connects with our purpose of developing leaders by getting to simple. Be sure to get your copy of Climb On! and let us know what you think.