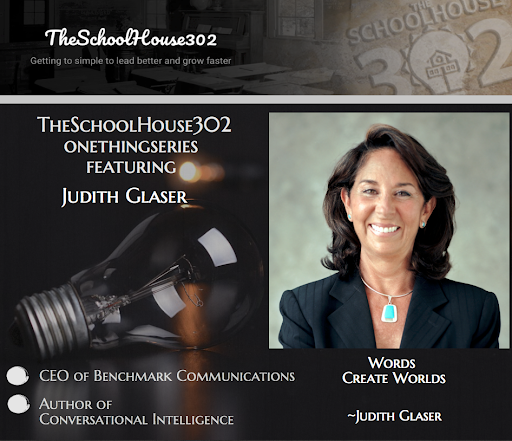 Don’t miss this leadership interview with Judith Glaser. Judith is an Organizational Anthropologist. She is one of the most pioneering and innovative change agents, consultants, and executive coaches in the consulting and coaching industry, and she is the world’s leading authority on Conversational Intelligence®, WE-centric Leadership, and Neuro-Innovation. She is also a best-selling author of 7 business books including her newest best seller – Conversational Intelligence: How Great Leaders Build Trust and Get Extraordinary Results. Through the application of “the neuroscience of we” for business challenges, Judith shows CEOs and their teams how to elevate levels of engagement, collaboration, and innovation to positively impact the bottom line.

In 2004, she was awarded Woman of the Year in New York City, and the same award, again, in 2017 by Smart CEO. Since 2006, she has been listed in the top 10 consultants globally in the Excellence Top 100 Consultants list and is one of the Top 100 Thought Leaders globally on the subject of leadership.

In 2011, Judith was awarded the Drexel University Distinguished Alumni Award, and in 2006 she was inducted into the Temple University Gallery of Success. She is a Founding Fellow of the Institute of Coaching at McLean Hospital, a Harvard Medical School affiliate. She guest speaks at a number of universities nationally and internationally including Dubai and China, universalizing Conversational Intelligence.

Her interview with TheSchoolHouse302 was incredibly insightful, check it out below.

Judith’s interview is filled with practical advice for leaders, and it really hits home on something we do everyday–communicate–but that we need to do better as leaders. Her ideas helps develop leaders by getting to simple with speaking and listening in a more profound way. Be sure to get your copy of her book, Conversational Intelligence: How Great Leaders Build Trust and Get Extraordinary Results, and let us know what you think.