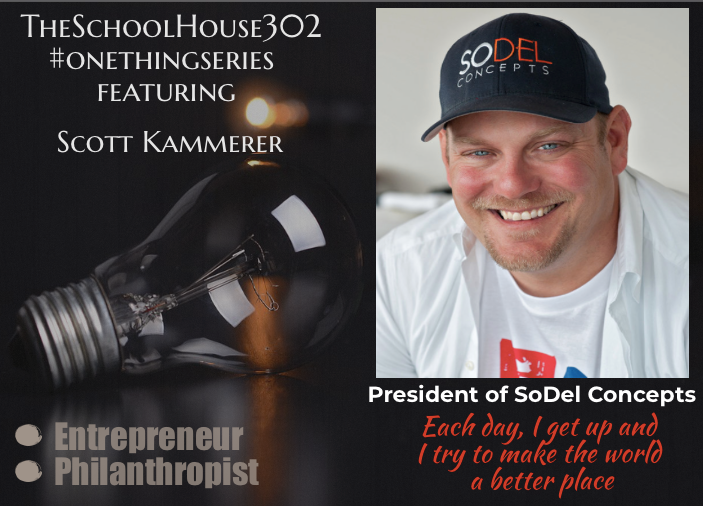 The larger we get, the more disciplined I have to be. ~ Scott Kammerer

SoDel Concepts operates 10 coastal restaurants, a catering company, and a food truck. The company has won a myriad of awards, including the Marvin S. Gilman Superstar in Business Award. Among the SoDel restaurants are Bluecoast Seafood Grill, named one of the top-10 destination restaurants in America by Attache Magazine, and Matt’s Fish Camp, which was recently awarded “Best Seafood Restaurant” by Delaware Today Magazine. Scott was also named Businessman of the Year in 2015 and the same title again in 2016 by Coastal Style Magazine.

Over the last 20 years, Scott Kammerer has established himself as a premier developer of restaurant companies and concepts on the East Coast. Scott is a founding partner of Highwater Management and HaleyKammerer Restaurant Consulting,  a co-founder of Matt’s Homemade Sodas, a line of craft sodas distributed throughout Delaware, a co-founder of SoDel Salts, a line of chef inspired flavored sea salt, and Executive Producer of SoDel Films.

Scott is also the founder of SoDel Cares, a charity that raises funds for causes that benefit children, at-risk youth, adults reentering society from the prison system, and the elderly who need assistance. In 2016, SoDel Cares was voted best local charity by readers of Coastal Style Magazine.

As you’ll hear in this great interview, Scott knows a ton about organizational growth, and his leadership insight is powerful.

We want to develop our people, make beautiful simple food, and make the world a better place. ~ Scott Kammerer