The challenges and rewards of leadership. Being positive is instrumental to the success of any organization, and it starts with the leader. If a leader wants a positive culture in the organization, she has to be the example first. Have you ever met a “leader” who is constantly complaining or moping around, feeling defeated and threatened, or, even worse, downright unhappy in the job? Even leading from a position of worry and uncertainty can have negative repercussions for culture. Maybe you have even experienced the leader who can’t commit to an idea because he constantly challenges new information, poking holes rather than being positive and finding opportunities. Why is this prevalent in organizations? Mainly because the challenge of leading an organization and navigating the daily obstacles is complex and almost always presents conflict.

Leadership guru, John Maxwell, reminds us that the definition of leadership is influence but the challenge of leadership is conflict. You can’t have influence without overcoming conflict. It’s that simple. But, leading through conflict can leave invisible scars resulting in a negative attitude, and that’s a problem. There are more ways to become negative than there are ways to lead with a positive attitude: dealing with the various personalities of your team is exhausting; daily unscheduled issues that arise can be debilitating. And so, there is no doubt that leading is hard, maybe harder than ever in the fast-paced environment you’re in. However, with the right mindset and the injection of positivity, leading is also incredibly rewarding. Bringing a team of people together to reach a common goal is energizing, and so it’s key that leaders stay positive and focus on the success rather than all of the obstacles. Amid all the challenges, stresses, and issues, embracing a positive mindset is possible through a simple idea we call RAP, or Routine Acts of Positivity. The premise is that great leaders need routines to be consistently positive, and no matter if it’s natural to you as a leader or not, you need strategies. Using the descriptions and tips below, you’ll build exactly the positive culture you want, which, again, always starts with the leader. 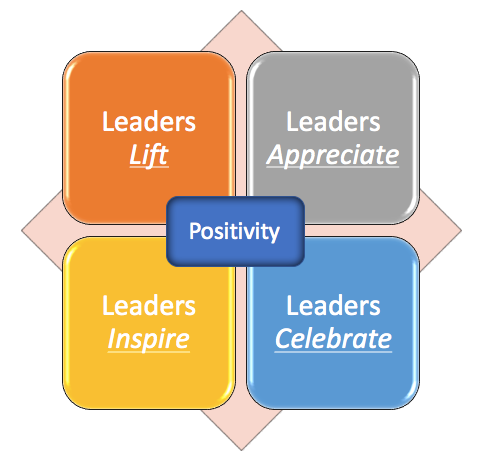 RAP#1: Leaders lift. One thing that the greatest leaders in history have in common is that they lift others. Lifting others can mean several things…improving capacity, increasing skills, accomplishing goals…the list could go on. Here, we define “lifting others” as providing others with kind comments and gestures that lift their spirits and infuse positivity into any scenario. As leaders, we have to be intentional with our efforts to remain positive, and where intentionality is critical, goal setting comes to the rescue.

Tip: Set Lift Goals — Try setting a “lift others” goal for the day whereby you plan to provide 10 lifts before the end of the day and one lift per scenario you’re in. You’ll find that it’s easy to do because it’s too often the case that you think of something nice to say that you don’t ever share.

RAP#2: Leaders appreciate. Every leader should recognize that every person they come in contact has an invisible “S” on their chest screaming “make me feel special.” Why do we quit getting gold stars after the 3rd grade? It’s a mistake. We are never too old to appreciate or show appreciation. Showing others appreciation and gratitude has lasting effects on work productivity and performance. A study conducted by Glassdoor, revealed that 80% of workers are more likely to work harder when their work is appreciated (as cited by Brooks, 2013). Appreciation can come in all shapes and sizes but we say show appreciation for your boss, your employees, your coworkers, and your clients. Showing appreciation is distinguished from “lifting” because it actually means saying “I appreciate…” and then providing a specific thing that the person did that you appreciated. Remember, lifting others, while just as important, is about kind comments and gestures.

Tip: Reflect to Appreciate — Reflect on your day, each day, on the car ride home. At the end of the ride, take note of 3-4 things that people did that day that you appreciated. Shoot a text to the people you aren’t going to see the following day, and tell anyone you know you’ll see the following day, face-to-face, that you appreciated what they did the previous day. Of course we advocate for spontaneous appreciation but this tip will help you get into the habit of appreciating often.

RAP#3: Leaders celebrate. If you want a positive yet driven environment, you have to find a way to celebrate wins, early and often. This strategy starts with having clear goals for the team, but most goals are not realized until well after the critical work is done. That’s why it’s important to celebrate the process of getting to the goal, rather than just success once the goal is attained (Blanchard & Bowles, 1998). Early wins are the markers along the way that your team is making progress toward the intended outcome and the right place to celebrate. Leaders infuse positivity by recognizing when milestones toward the goal have been achieved, and that lets everyone know just how important the work is and establishes the right culture early.

Tip: Set Markers — For every goal you set, also determine the markers or milestones that matter as indicators that the team is on the right path. These are the places to celebrate, early and often, giving the team the sense of positivity they need to continue driving.

RAP#4: Leaders inspire. Unfortunately, people often describe their work culture as having “no hope.” They feel like the goals are impossible, the customers are relentless, the work is piling high, and there’s no end in sight. This lack of hope often stems from redundant work, work that gets interrupted, an inability to see a product, and often problems that employees have no say in solving. Leaders can inspire hope by allowing people to work with thought partners, in teams, as problem solvers, and by giving regular opportunities for input into company processes. In fact, the best leaders spend most of their time in the most important spaces in the organization, where the real work is being done, and not in an office. Providing creative outlets, and even time for employees to tinker with pet projects that excite them, inspires a general hopefulness about the work. Inspiration is really important for a positive outlook.

Tip: Value Innovation — Make sure that you communicate to your employees on a regular basis that you value their thoughts and ideas. Create a response system where everyone has say in how they work should be done. This could be through a professional learning team process or systems of support for people to engage with the work that they find most meaningful, joining the teams and committees of their choice (Kotter, 2014). The goal is for people to see that they’re adding value and that through the value they add, input they’ve been awarded, and feedback they’re permitted to give, they will have hope about the work they do.

Being a positive leader and creating a culture that recognizes and supports achievement is a decision that requires effort and a solid strategy. The four parts of RAP simply provide a model to ensure that positivity is a focus, each and every day. Goals are exciting to set and everyone enjoys achieving them, but it is the gap between the setting and the achieving where we need the most support and encouragement. Utilize RAP to build a culture of positivity and enjoy the success that unfolds.