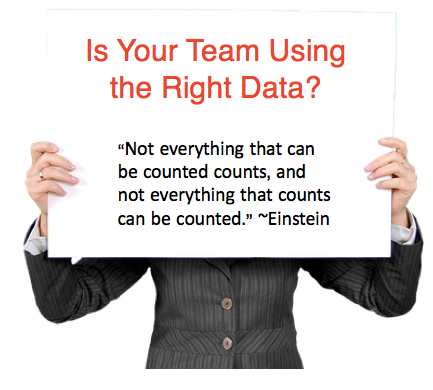 Susan’s team was finally right. As Jim Collins would say, the right people were in the right seats on the bus. They had all the elements of effective teamwork, including a deep level of trust for one another. However, the team recognized that they were having issues building and sustaining their momentum. They found themselves wrestling with the same issues and problems, even after they believed that they made progress. The problem wasn’t the people, it was actually hidden, more discrete, in terms of the decisions they needed to make–the problem was data…

In most organizations, the practitioners with boots-on-the-ground can tell you that the data being used to measure success is, in fact, the wrong data altogether. Tim Ferriss is famous for his anecdotes about using the wrong measurements of success that can actually disincentivize the right results. He tells his personal story to his listeners about his high school counselor dissuading him from his lofty college choices so that the counselor’s acceptance numbers remained high. Many organizations do the same, such as, incentivizing  shorter customer service call times to maximize resources, which doesn’t help with customer service in the first place.

When organizations use the wrong data for decisions, the results can be disastrous. According to IBM, poor data costs the US 3.1 trillion dollars annually (IBM). In fact, in the case of the wrong data at our fingertips, we might as well not use data at all. Malcolm Gladwell tells us that if you have enough experience, you can actually make accurate decisions in an instant. That’s better than using bad, wrong, or late-to-the-game data sources.

We suggest three ideas about data that go a long way in changing your mind about which data sets to use for decision making.

Use unconventional data sources. Many businesses use quantitative metrics, schools use student outcome reports, and every new online tool or software package provides analytics of some sort. You can’t post a YouTube video and then ignore the strong reporting features. But these data sources are conventional and provide only a surface level overview, mostly descriptive statistics. Businesses have to think Moneyball style if they want to have an edge on the competition.

Key Question: Do you fall into the trap of common metrics? Or do you look for sources of data that may provide powerful information?

Let data tell a story. Too often we describe our data usage strategy as data-drive decision-making versus a data-informed approach to decision making. These are very different tactics for using information. The former is about looking at numbers to determine action while the latter is about triangulating and generating as much information as possible before moving in any new direction.

Key Question: Do you let the data guide you and tell its story, allowing the action plan to unfold? Or do you take each data point on face value?

Turn data into a strategy. Most of the time data is an output. It’s considered long after all of the action has taken place and it tells us about the past. It comes at the end of a quarter or after a big deal is done. But data should be an input. Something that we review to be able to take action.

Key Question: Does data inform your decision making through leading indicators for the future? Or are you wrapped up in a lagging data reports, informing you of what was already done?

This month we want to help you make data into a verb so that you can lead your team to better outcomes in a faster way. Stay tuned for our #onethingseries.

We value your comments, likes, and follows.